Online or Shut Down

You are here: Home / Resources / Case Studies / Online or Shut Down 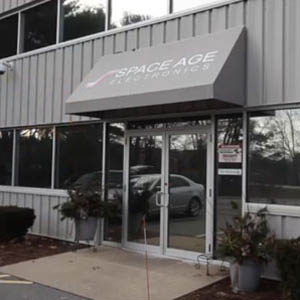 No excuses is the motto Space Age Electronics’ founder the late Pete Mongeau instilled in his business. And that bluntly simple philosophy has helped steer the Sterling, Mass manufacturer through sixty years of dramatic growth. They apply their no-excuses philosophy to each customer’s evolving demands. And those customers have to be demanding, because often the Space Age product is there to literally save people’s lives: Space Age Electronics manufactures among the industry’s best-regarded integrated fire alarm and building automation systems panels.

The following describes how the manufacturer’s growth led them to seek the IT continuity solution provided by Bryley, as told by Space Age Electronics’ Director of Technology Ryan Mongeau.

If Systems Are Not Online, We Can’t Manufacture Anything

Space Age is a family business that has swelled to seventy employees and three manufacturing facilities. Yet it still has much of its original character. Ryan said, “there’s an atmosphere in the company of laid-back confidence that comes from Space Age’s reputation in the industry. We know what we need to do. We get done what needs to get done. Our confidence allows us to push ourselves and keep the work at a high standard.”

Like most family businesses Space Age started by keeping as much as possible in-house. Ryan said, “we did our best to keep moving forward year after year. But we ended up with seventy people and still one person managing the IT infrastructure for the entire operation.

“We’re a pretty complex manufacturing operation. And we really rely on systems being online and available pretty much all the time … put it this way – if they’re not, we can’t manufacture anything.”

Too Much for One Person

So as Space Age grew it got to the point of having, as Ryan said, “a lot of moving parts in multiple facilities, which is a lot of tech and networking to manage. That one in-house IT manager could not meet all the needs and keep up with all the up-to-date, cutting-edge tools and networking approaches. Also in companies of our size, people wear multiple hats. So if you’re helping with IT you’re also responsible for a bunch of other functions in the organization and IT doesn’t always get the highest priority. Almost ten years ago, we knew we had to handle IT differently.” And so they looked outside for a solution.

Ryan continued, “we were so fed up by lapses in IT that we went for an outsourced answer. But I think we acted out of feeling desperate for a solution, and went for a situation that really wasn’t a good fit.

The external IT company was “too small an operation,” Ryan said. “To try to meet our needs they stretched themselves thin, which obviously for Space Age is not a benefit, because we’re not getting the service that we’re expecting and that we need day-to-day. And maybe they couldn’t be proactive because they were stretched too thin. So, even after making the switch to an outsourced IT vendor we still felt we were just running around in circles and making no progress forward.

“So, we had to get Space Age out of that relationship. And we brought IT back in-house. And that brought back all the problems.

“And without a ton of support coming from in-house IT, frustrations kept growing. When things aren’t working well and we don’t have an instant response or even an action plan … for end-users that can be very frustrating. And the main in-house IT person is doing the best he can, but there’s a sense of him not really knowing the industry standard approaches or what a better approach to a situation might be.

“Being in-house means rolling with whatever you can make work, which can result in system downtime or extra costs or less than ideal performance – and not really getting one-hundred-percent out of a piece of equipment that you’re paying for and trying to use. If you don’t have the technical expertise, you’re only able to go so far. And eventually when your organization is complex enough, being in-house becomes more of a roadblock than an asset.”

Because of the negative outsourcing experience it took some time and a considered coming together of the leadership to decide to address the in-house IT problem that was hurting both productivity and morale. Ryan said that he and “the president and the vice president of operations had meetings where we looked at where Space Age was at that time, and laid out where we wanted to be five years out. Then we asked what it was going to take to get us there.

“And we analyzed a couple different scenarios: If we’re going to invest money in Space Age to continue to do IT on our own, this is what it will look like. If we bring in an IT company that has decades more experience than we do at it, this is what it will look like. And we saw how we would get where we wanted to be faster and with a better approach and a more sound foundation to carry the company long-term.

“Besides our previous bad experience outsourcing IT, the cost of going with a larger IT company [than Space Age had used before] was definitely a roadblock along the way to deciding. It’s a huge risk and a significant amount of money.

“So here we were going for a second attempt at trying to find someone to manage Space Age’s whole infrastructure. The significant difference was the Space Age leadership all agreed this time we had to find someone who would be the right fit for us.”

“It started with some word-of-mouth inquiries,” Ryan explained. “We called our business partners for names of companies they were familiar with. We also looked online to see the managed IT companies in the area who fit our profile.

“About halfway into the process of looking at managed IT service providers [MSPs] – I had already talked to quite a few – our vice president of operations told me, ‘I think the you should speak with Bryley. I’ve done business with them in the past. I’ve heard really great things about them. They’ve got a good track record.’

“I had started looking at MSPs way before I brought Bryley in. A couple of them were pretty large organizations – some of the largest in New England, but what comes with that is you don’t really get a personal relationship. But after speaking with Bryley and going through their capabilities and what we needed, we seemed to really align well.

“We decided to go through an evaluation period with a couple different MSPs. But we found that Bryley was the right fit. It felt like Bryley didn’t treat us like a client, they treated us like a business partner. They were clearly on another level compared to the other MSPs. It’s the kind of connection where you feel our infrastructure is their infrastructure. And Bryley’s culture feels very, very similar to ours. They’re also really physically close to us, which is a huge benefit.

“Also we spoke to a couple of manufacturers that have large IT infrastructures similar in scale to ours and they had absolutely glowing reviews about Bryley. That really solidified the choice of Bryley for us.”

“So once we got through the on-boarding phase with Bryley,” said Ryan, “– getting them up-to-speed on the organizational knowledge buried deep in the walls at Space Age, which is a pretty steep process to get them knowledgeable enough about our processes and procedures so they can support Space Age with what it needs every day – everybody at Space Age loves what’s been happening.

“We’ve got one of Bryley’s service techs coming in every week who does the rounds, checking in with everybody. We have never had an IT system that works as well as today. We’ve never been this stable. We’ve already made a ton of improvements. We’ve brought in new technology packages, phased out some older stuff that was beyond end-of-life and optimized the network as a whole. So, we’re significantly better off than we have ever been.

“And we meet with Bryley once a quarter to look at the laundry list of things that Space Age wants to get done, plus the recommendations that they have for us. So it’s constant forward progress that we never would have gotten to on our own.”

Calculating the Value of Continuity

“When we were doing our IT company search,” explained Ryan, “the goal we wanted to get to was 99.9% uptime. We had been operating in the mid- to low-nineties range. I know that doesn’t sound like a huge jump from ninety-three to ninety-nine, but when you factor in how many dollars per hour is wasted on that five percent of downtime, it really adds up.

“When our system is down it means we cannot manufacture anything, which means no revenues coming in, no products out the door, and it means additional payroll. So every minute that we’re down or every day that we’re down adds up to tens of thousands of dollars. Even still all that adds up to a lower number than it costs for us to have Bryley cover our entire infrastructure. But that’s not a complete equation.

“When things aren’t working optimally or they’re not working at all that means nobody can do their job in any way. It’s extremely frustrating for the leadership at Space Age, as much as it is for the people that are showing up and expecting to be able to have the tools they need to get to do their job. And if those things are not available that is incredibly frustrating.

“We hadn’t been super-proactive about IT at Space Age prior to working with Bryley. We were very reactive. When something went wrong, then we addressed it. So if we were being more proactive and looking into the future state of the overall infrastructure, it brings the amount of service requests down – our goal was a fifty percent reduction – because you’re doing more preventive measures as opposed to just waiting for something to explode and then trying to scramble to solve the problem.

“And Space Age is really trying to get ourselves to the next level with the help of the recommendations that come from the more than thirty years’ expertise and experience of an entire IT organization at Bryley.”

The partnership between Space Age and Bryley is a bold step that demonstrates Space Age’s commitment to achieving its five-year ambitions by stabilizing and developing its technological infrastructure. The journey that brought Space Age to Bryley is a testament to its founder’s no-excuses directive.