You are here: Home / Blog Post / A Few Minutes with Carlos, Field Technician 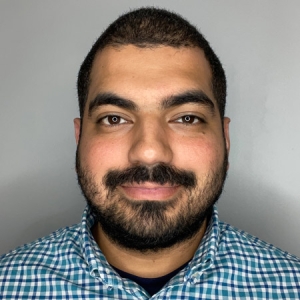 “I didn’t get a chance to serve in the military, so I pivoted toward cybersecurity to protect our country from nation-state actors.”

“Whatever I can do to make a person’s job easier,” was Carlos’ sincere response when I thanked him for moving closer to the mic during this interview. Carlos’ attitude of respect comes through often.

At just twenty-five Carlos was entrusted as operations manager at a Massachusetts manufacturer. But being, as he labeled himself, “a family man” who would “do anything to protect my child” he remained motivated to keep looking for how he might fulfill his feelings about the importance of giving back. It was around this time that he saw the film, Zero Days. In the documentary about cyberwarfare, New York Times reporter David Sanger explains that “we are the most vulnerable nation on earth to cyberattacks.” The film challenged Carlos. And it energized him to begin the pursuit of a career that would protect his family and his country through cybersecurity.

When did you start at Bryley and how did that come about?

Carlos: I came from non-technical jobs. I was in customer service. I was a recruiter for a staffing company. I was a property manager. I was an operations manager. At night I worked on and achieved my CompTIA A+ certification1, so I could move toward cybersecurity. I was hoping IT would be a good starting point and was thrilled when I was offered the field tech position at Bryley. I started in September.

You were given management responsibilities at a young age.

Carlos: I’m determined to do the best job I can no matter what. I’m goal-oriented. My philosophy is always, wherever you go in life, make sure you’re growing. Don’t let yourself be stagnant. Going up the ladder means you get to have a bigger impact.

Can you talk about your interest in cybersecurity?

Carlos: I didn’t get a chance to serve in the military, so I pivoted toward cybersecurity to protect our country from nation-state actors. We’re getting attacked constantly by Russia and China. We play by rules and those nation-state actors do not. Being aware of things like WannaCry and Not Petya [malware], I realized more Americans need to step up and help the country. I have kids. I don’t want them living in the darkness, because China has infiltrated the electrical grid.

How do your responsibilities as a field tech match up with your sense about protecting the country?

Carlos: Working in IT is an important component of cybersecurity. Smaller businesses are foundational to the country – they must be kept safe. The right attitude for cybersecurity is to protect everyone – from the smallest to the largest parts of the country’s infrastructure. Most of what I do now is help Bryley clients have good infrastructure hygiene: making sure backup redundancies are functioning right so there’s no downtime, making sure they’re protected from viruses and malware, patching.

And how do you see your career progressing?

Carlos: My goal in five to ten years is to become a security analyst. I’m in training now to achieve CompTIA Network+ certification and plan to seek certification in CompTIA Security+ after that. I want to keep growing. I understand some people take the opportunities of America for granted. I don’t. I want to keep making things better. I want to provide my kids a better future.

1 An IT industry-recognized credential that demonstrates a certification-holder’s ability to perform critical IT support.

Learn about getting IT support for your organization